The widely used and a simple thing like exception handling is often done in a wrong way. There are documentation about try/finally and try/except statements of course. And there is a lot of different places around the web where the things are described about a certain use cases. I just wanted to explain my vision about that.

So first I will describe when we usually use the try statements then the thing how we should not use them and after that I will try to illustrate different usage patterns for the try/finally/except statements.

We only care about to use of these blocks when we know that the exceptions can be raised while executing our code. So usually we are not going to guard the local variable assignment or IF operator which compares the value of the parameter with constant. I say usually, because even such a statements can throw the exception – it all depends on the context and implementation. When you have operator overloading you can get the exception thrown from the operator overloading method. Or when using the variant types the conversion will fail for a certain data type with EVariantCastError or any other similar cases.

The use of such try/finally and try/except constraints starts when we deal with resources! So what’s the resources:

So when Finally and when Except

This is the simplest thing to solve. You need except to handle a certain error – so to execute your code in case if certain (or any) exception is raised. And when you need to ensure that a certain part of your code is executed in the end of the some code block then you use finally.

When to not use

Try to never suppress the exceptions with the empty except end clause. This is just bad behavior! I will be not the first who writes about this – there are different books about coding style, writing better code etc, maybe also a lot of topics in the internet about this in other programming languages as well. Some core points are clearly enough stated in this stack overflow answer. So please try to avoid the following constructions:

Sometimes it can happen that the code which is absolutely safe is put into the try finally/except block and the block itself is extensively used in the loop for a certain processing of the data. Try blocks are not just a empty statements. When you add try blocks the compilers adds extra instructions and handling to your code which actually slows down your code. Of course it’s very small penalty in general code you write every day, but when we are talking about redundant try blocks in some code which is executed billion or quadrillions times – that will be just waste of the CPU cycles!

which is translated to the following assembly in Win32:

Just imagine if we add the redundant try finally block for the loop body:

the code generated will much bigger: 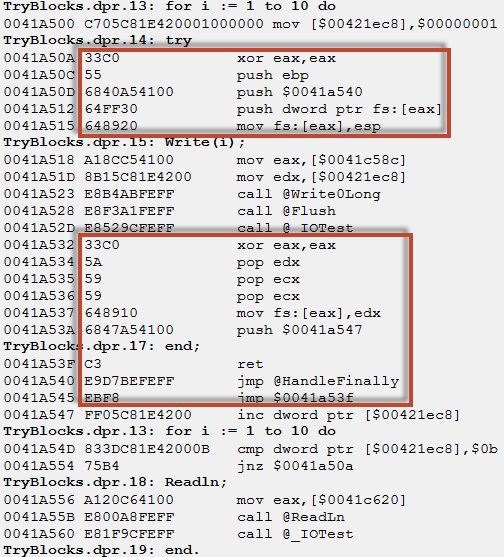 So now you should see the performance penalty of each redundant try block added to your source code.

When raising the errors in your application, please do not use the code like this:

The exceptions should be tied to the context where they can be raise or at least have some logical link. Define exception classes for your error cases like this:

Again: do not use one exception type for all kind of errors – then you are in the same situation like before (it is of course better than just raising Exception, but still is not good). Build the structure of your exceptions – because even implementation is called SEH (structured exception handling) 🙂

You can check one “fail” unit from VCL library. Just take a look at Vcl.Imaging.pngimage:

That’s not the way it should be done! Why? Imagine you load the TPNGImage from stream and want to check if it fails because of the PNG format error and not because of any other error – then you have only one chance to handle that like this:

Stringly-typed! If they would define the EPNGException (or use ENGError, whatever) and then descend all of their exceptions from it then it will much cleaner and better!

When using the try blocks in most of the cases developers do not need to think about the way they use the statement because they already have the patterns in their mind and do that automatically. But while that’s true for the experienced developers (which I assume are not the target pool of this post :)) it is not true for the beginners.

Why is this important? Because using the try blocks correctly can and will avoid the following issues in your applications:

Adding the object to a collection

is a potential memory leak. Sure I am a bit paranoid there, but if you get any exception in Add method the TCar instance will be leaked!

Working with a file

Creating the interfaced object and passing it as interface

In this case once you constructed the TInterfacedObject and assigned it to the variable of object type (TMultiService) it will be not disposed automatically. That’s why you should apply standard try/finally pattern there. But there is one thing to remember. Once you passed the variable of object type (in our case M) to a variable or parameter of interface type (IService1, IService2) the lifetime of the instance from that moment is managed by the reference counting.

Thank you for reading this post. I hope you learned something new and this information was of some use.